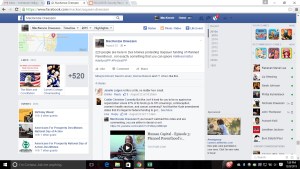 Mackenzie Dreeszen’s parents had obviously prepared her well for life.      Mackenzie not only managed to survive or maybe even miss the dormitory debauchery and binge drinking that destroys so many while on campus, but she was one of a shrinking number of college graduates who quickly found a job and started her career.  In the short time since graduation she has started her own business, is a productive member of society, and making a difference.

Which might be part of the problem.  Some simply don’t like the difference she’s making.   Apparently, after making it through without the scars of a liberal, leftist, society that are all too embedded on many of our campuses today; those who demand control of public dialogue are determined to extend their tentacles of intolerance past the clutches of a campus to expel dissidents (free thinkers in this case) right out of their little communes.

Though more subtle, the course of action often looks like this: Assimilate – or  – we will humiliate -> intimidate -> isolate -> confiscate and finally eradicate.

Which is pretty much what Cornell College‘s Delta Phi Delta Triumvirate 2015/16 has attempted to do without any notice or recourse offered to Mackenzie.    What was Mackenzie’s offense?   In August 2015, she attended a rally to protest taxpayer funding of Planned Parenthood and had the audacity to post it on Facebook with the following text.

“220 people are here in Des Moines protesting taxpayer funding of Planned Parenthood…not exactly something that you can ignore ‪#‎alllivesmatter‬‪#‎defundPP‬ ‪#‎ProtestPP‬.”

Being told later that the phrase of #AllLivesMatter was racist – you can see what Mackenzie was up against, right?   Inclusive words like all are now racist?

What followed was an exchange on Facebook from other Delphi members and alumna with hate-filled personal attacks against Dreeszen and her fiancé, even implying he was a murderer for his military service in Afghanistan and Iraq.  Six weeks later Dreeszen received a letter stating her alumni status had been revoked from Delta Phi Delta.    Though, she’s being accused of being disrespectful of others, Dreeszen is the one being tried with no notice, no ability to face her accusers, and no opportunity to defend herself.  #ThenewSocialJustice

Cornell College and President Jonathan Brandt  has refused to intervene.  Interestedly, the college Facebook page has allowed some very ugly attacks toward FB users who posted comments questioning a campus event on “Islamophobia” that should concern any parent considering the cost (financial and otherwise) of sending their student to college.

Listen/watch the ongoing story in the Truth Four Our Time interview above.   See this petite young lady who is thankfully not allowing the attacks of others to go unanswered.  Her bravery is to be commended.   Since sharing her troubles, many others have shared similar stories with her.

If you have a story like hers, let us know at info@TamaraScott.com.